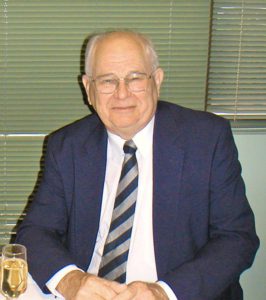 Tom first became involved with archery as a parent of two youngsters at Adelaide Archery Club, circa 1970. At that stage his ability as a tooling design engineer and craftsman became evident through the projects he tackled for the Club.

Upon retirement from (distinguished) service and leadership in the Scout Movement…. awarded Medal of Merit, 1965; Life Member; awarded the Silver Acorn, 1975 (2nd highest award in Scouting), Tom joined Adelaide Archery Club in 1976 and a 30 year association with Club and the sport began; a sport he had long wanted to enjoy.

He was President of Adelaide Archery Club from 1981-1992 (and AAC’s delegate to ARCHERY SA during that time). During his term as President, Tom was instrumental in the expansion of the Clubrooms, installation of the bore and irrigation system, change in the Club’s shooting orientation to north/south, design and construction of the permanent butts, and fitting out the Clubrooms, workshop and storage area and other facilities and devices too numerous to mention. Tom was awarded the Club’s Life Membership in 1987.

It is fair to say that under his leadership Adelaide Archery Club not only prospered but grew into a Club which had facilities which set the benchmark for others. Tom encouraged the sharing of those facilities for ARCHERY SA functions, during National events and particularly for the 1987 FITA World Target Championships and the 1991 ONOC Seminar.

In his role as Equipment Officer Tom designed and built equipment for tournaments and saved considerable money in the process. This is not to suggest the equipment was basic – it was designed to last for years, to be robust yet functional and was assembled to an excellent standard. His design of the steel framed target butt frames, initially for the 1985 Junior Nationals as a forerunner to the 1987 World Championships enabled ARCHERY SA to provide such equipment for several National events, in addition to local tournaments with minimal maintenance. At the 1987 World Championships, the steel frames were well received and their clever storage design was favourably commented on by many. Clever design was Tom’s forté and symptomatic of his ability to think outside the square. He went to on to design a successor to those target frames, to create wheel-able frames to accommodate the new generation of foam targets obtained after the 2000 Sydney Olympics. Tom’s shed at home was his domain and the flow of designs & constructions seemed unstoppable.

Tom’s efforts as Equipment Officer were clearly far and away beyond the call of duty. Indeed his zeal in the position greatly assisted ARCHERY SA and achieved his aim to make the physical aspect of setting up tournaments at State and National level so much more comfortable and efficient.

In recognition of his work for ARCHERY SA, he was awarded Life Membership of ARCHERY SA in 1992.

His activities were not confined to just Club & State levels. His work at the National level with Archery Australia included:

His tireless work produced benefits for the sport across the country and for SA.

Tom had time for most people, although he often said he didn’t suffer fools well. However, his pragmatic and reasoned approach provided a balanced approach to decisions taken. After consulting users, he would consider all options and create a design to suit. Tom planned and built things with the long-term view – they had to be built with quality to last and designs had to suit all reasonably foreseeable eventualities. Both in the design and execution of tasks, there were two ways of doing things – Tom’s way and the wrong way. He would listen to alternatives but, such were his powers of analysis, he rarely had to change his view. It was only in later years he seemed to mellow – admitting there might be alternative solutions that possessed qualities similar to his!

He had a desire to ensure that archery was a legitimate and respected sport, conducted to the highest standards of excellence. The manner in which State and National Championships (Junior, Open and Indoor) are presented in SA bear testament to his contribution. Tom’s incisive contributions at meetings, his personable nature and his depth of experience were also significant assets for SA.

Amongst all of this effort, Tom made time for his family and was a devoted family man. He was extremely proud of the achievements of his children and grand-children.

“A sharp tool is always safer than a blunt tool.” – TA Jorgensen