At 14 years of age, Simon joined the Strathalbyn & District Archers in South Australia in 1984. His initial interest was to go hunting, with a compound bow, but target archery soon appealed to his competitive nature instilled from his sporting family background. He soon changed to the recurve bow.

Rosney Johns took him under her wings and this devotion paid off when Simon became the Senior Champion for 1987 in Perth.

Four years later at the age of 18, he won the Visitors’ Section of the 1988 USA National Championships, with the only person to beat him being the eventual Gold Medallist at the 1988 Seoul Olympics.

At the age of 21, Simon became 1991 World Champion in Poland. In the teams event at the same Championships, he was a Bronze Medallist.

He competed at the 1993 and 1999 World Indoor Archery Championships. At the 1999 Championships, he was a member of the Australian archery team that won the Gold Medal.

He was a member of the Gold Medal winning team at the 1998 European Grand Prix in the Czech Republic.

In 1999, Simon left South Australia to concentrate his efforts at the Australian Institute of Sport in Canberra. 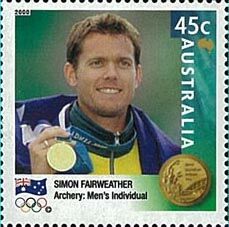 At the Olympic Games in Sydney 2000, Simon became the first ever Australian Olympic Archery Gold Medallist, beating Vic Wunderle (USA) in front of his home crowd – the television ratings for that match rated highly across the country.

In January, 2001 Simon was awarded the Medal of the Order of Australia (OAM).

Simon was a scholarship holder at the AIS from 1998 to 2001 (also during the lead-up to the Athens 2004 Olympic Games) and worked as assistant archery coach from 2000 to 2002, under the guidance of LEE Ki-Sik, to who Simon attributed much of his Gold Medal success.

His other honours include:

After moving out of sport in 2002, Simon put the skills he developed studying jewellery design at the University of South Australia (1994–1997) to good use, establishing a gallery and studio complex in the NSW town of Bungendore, not far from Canberra.

However he returned to the sport and was appointed Archery Australia’s National Head Coach 2009-2011. As Coach, he was responsible for the team at the 2010 Commonwealth Games in Delhi (IND) which won gold in the Men’s Recurve Teams Event and for the archers to the 2011 World Championships in Italy.

In the course of his extensive sporting career, Simon competed in five consecutive Olympic Games and fourteen archery world championships, winning the title in 1991.

Simon married Jackie (nee Gallagher) in 2004. Jackie was the inaugural head coach of AIS Triathlon and the only woman to have held both world triathlon and duathlon championship titles in the same year (1996). (Sadly, Jackie died in 2014.)