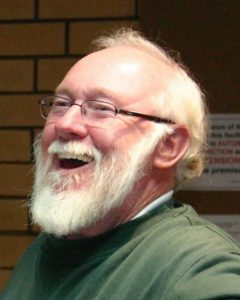 Jim Hale was a part of archery in South Australia from 1979 after co-founding TFIAC (The Farm Indoor Archery Club).

Jim took up archery and learnt how to introduce and coach people into the sport. He coached people as beginners and helped them to advance to higher levels of competence and, where appropriate, directed and encouraged many to participate in AJADS and State teams.

In addition to his 45 years of involvement with Gymnastics in South Australia as both a coach and Judge, Jim was President of TFIAC until 2008 and Head Coach until February 2010.

Jim organised for TFIAC to pick up the Archery Golf day and ran this almost single-handed, until the last couple of years, as a TFIAC event.

After many years working at the Farm Recreation Centre as a Sports Programme Coordinator, Jim became the Development Officer for ARCHERY SA in 1998. He organised the schools programme and taught at schools all over the State where he was well received and loved by school staff and students. Jim grew this role to the point where a second mobile training unit was added to the programme. He continued in this role for over 10 years.

Jim worked with people to help start-up the Blue Lake Archers and encouraged interest in Leigh Creek and Coober Pedy. He started a Field Archery Group at Mendips near Forreston in the hills and, when this failed due to land owner circumstances, started an outdoor target group at Birdwood that has since combined with TFIAC.

Jim organised Come n’ Try sessions around the State in both the city and country.

Jim worked with the Scouts and after 3 years of planning ran the archery programme with a team of volunteers for the 2004 Jamboree at Long Gully, Belair National Park, where 8,000 scouts participated over 8 days.

A celebration memorial of Jim’s life was conducted on 25 April, 2010 at the Farm Recreation Centre attended by more than 350 people – a testament to the reach of this man. Pam Hale was awarded a plaque for Jim’s service to ARCHERY SA by President, Ted Templer.

Jim was a true gentleman, dedicated to the sport and to introducing people to the sport. Jim has helped shape archery in SA.