Over a period spanning some 53 years, Gordon Pawson made a significant contribution to the development of the sport of archery in Australia at every level of activity. 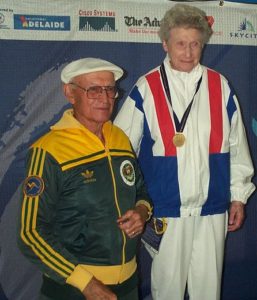 His major contributions have been in the areas of the development and practice of coaching and the development of archery for juniors. Using archery as an activity, he supported the Camp Quality Adelaide organisation for children with cancer, since 1985.

Gordon joined the Adelaide Archery Club in 1959 and held office in that Club for 37 years. During his term as President (from 1961-1969), the Club built and equipped new premises and he personally led the establishment of a sound system of administration which is still in place today. It was during this period that the Adelaide Archery Club became and has continued to be one of the largest clubs in Australia.

(Picture shows Gordon presenting medals at the 2005 Australian Masters’ Games. Shown with another doyen of the sport, Yvonne Gavin, NSW)

From 1963-1968, Gordon single-handedly conducted the Australian Postal League – a two-monthly Australia-wide competition aimed at raising the flagging spirits of the then Archery Association of Australia (AAA) (now Archery Australia).

From 1964 to 1975, Gordon was a member of the AAA Rules Committee, contributing to the development of practical national administration and tournament rules. For six of those years, he was Chairman of the committee.

From his early days as an archer, Gordon showed a keen interest and particular proficiency in coaching archers.

In South Australia, he extended his coaching activities beyond club level, visiting metropolitan and country clubs to conduct intensive coaching courses and undertaking courses of study to further develop his skills.

From 1967-89, he was a frequent contributor of training and coaching articles to “Shooting Lines”, a bi-monthly national archery publication published by Alex Barter.

National recognition of Gordon’s dedication and ability followed when, in 1977, he was appointed as the AAA’s National Coaching Director. In this role, he initiated major improvements to archery coaching.

With no Australian coaching manuals available at that time, he prepared coaching booklets specifically suited to Australian conditions. These were published for use throughout Australia.

In 1990, he undertook the editorship of the first complete AAA Coaching Manual, finishing the task through to publication in less than a year.

In 1981 and 1990, Gordon was a principle presenter at international Archery Coaching Seminars conducted in Adelaide by the AAA on behalf of the International Olympic Committee. In these, he took his place among national and international sports science professionals and coaching experts.

In 1984, he was appointed an AAA Level III Coach and, later, with the development of the Australian Institute of Sports Standards, a National Accreditation Scheme Level II Coach – both appointments being, at that time, the highest held by any archery coach in Australia.

For over 30 years, Gordon was a presenter, State Coaches Examiner and a practising coach for all levels of proficiency.

In 1981, Gordon was appointed coach to the Australian team competing at the World Archery Championships in Italy. Australia’s first woman to win a World Championship medal (bronze) (Marilyn Rumley, Victoria) attributed her success to Gordon’s coaching.

In 1982, he was appointed to coach two teams. One team contested the Asia/Oceania Target Archery Championships in Japan, the other won a bronze medal competing in the Commonwealth Games held in Brisbane.

In 1987, he was appointed Manager/Coach to the Australian team at the World Target Archery Championships held in Adelaide.

Gordon personally coached many South Australians prior to their competition in Olympic or World Championship events. Adelaide’s Simon Fairweather, 1991 World Champion and 2000 Gold Medallist Olympian, consulted Gordon on aspects of his skill development and preparation.

Gordon (in his 80th year) was also a torch-bearer for the 2000 Olympic Torch run in SA – a photo has pride of place in the Adelaide Archery Clubrooms.

In the mid-1970s, believing that the successful expansion of the sport lay in the retention of juniors, Gordon devised an improved coaching scheme for juniors. Testing the system at the Adelaide Archery Club, he soon had juniors achieving better results than was previously the case. For a period of 5 years from 1981, Gordon took charge of a small junior archery section of the Adelaide Archery Club and applied his system. Over this period, the growth in this section was phenomenal, the juniors finally making up nearly half the membership of an expanding club. This section continues to flourish to this day.

His system for junior archery development and junior archery club organisation was committed to writing and has since been provided to the National Juniors Committee for use throughout Australia. It has also been made available to the countries of Oceania.

In 1985, Gordon volunteered to organise the archery segment for a Camp Quality Adelaide activity. Such was his success with the children, that this became the start of a long association with Camp Quality. Beginning as an annual event, through his support this has now increased to three camps/year. The participants rate the archery activity very highly.

Through Gordon’s initiative, Adelaide Archery Club members (and others) now devote their time and facilities on those days for the sole use of the Camp Quality children and their families, entertaining the children and providing the opportunity for parents to meet, discuss their problems and exchange experiences.

Gordon has been awarded the following:

As a self-assured but modest man of gentlemanly demeanour who has achieved so much and helped so many archers selflessly and equally, he commands enormous respect and affection within the archery community.

It says much for his lasting influence that, having lifted the standards in all that he undertook for archery at any level, those same high standards have been carried on by his successors.

During Gordon’s working life, he was an automotive electrician by trade and served with the Royal Australian Air Force during World War II.