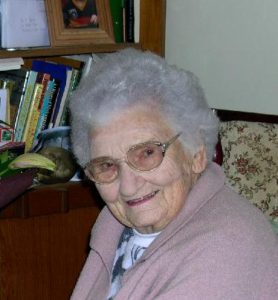 Many members of ARCHERY SA gathered on Friday, 10th July, 2009 to farewell Edie Barter who had died on the previous Saturday. Around 5 months short of her ninetieth birthday, Edie had seen the rebirth of archery in South Australia and indeed in Australia. Not only had she seen this rebirth, she had actively participated in it.

She married Alex Barter in 1940 and together they helped to nurture the growth of the Adelaide Archery Club, ARCHERY SA and Archery Australia – all in the period at the end of and shortly after the Second World War. The inaugural meeting of Archery Australia’s Council was held in her home in August, 1948 and she was proxy Council Member for various States in the first few years of Archery Australia. In 1950, she was AA Treasurer for a year.

In 1999, Edie presented the trophies to the Clout winners at the National Championships. She told me then that she believed that she was the last surviving competitor from the first Nationals in 1948. She won the Target event at the 1949 Nationals and had almost a clean sweep in 1950. In 1951, she was too busy to compete – she was giving birth to her fourth son Russell. Edie blamed him for her losing her touch! However, she continued at the State and Club level for many years and last competed in the 1989 Adelaide Masters’ Games.

Edie was a life member of the Adelaide Archery Club and, during its early days, contributed significantly to the provision of the magnificent facilities that the club now enjoys. At any social function, it was always Edie who organised the raffle and you were in serious trouble if you didn’t buy enough tickets!

One of the clubs to grow out of the Adelaide Archery Club was Cressy Bowmen and it was Edie’s pressuring of the Prospect Council that saw Cressy gain a lease on Broadview Oval – a ground that it used from 1965. Coincidentally, their connection with that ground is shortly to be severed (ended 28 March, 2010).

Also in 1965, Alex and Edie took over the bi-monthly publishing of “Shooting Lines” – a nationally and internationally distributed archery magazine – a role they maintained with a small band of helpers from the club until 1989. Alex and Edie were the proprietors of Archery Equipment Company, a business which operated initially out of their garage and which supplied almost anything that you would need as an archer. Although Alex provided the equipment service and technical knowledge in the shop, it was Edie who managed the books and, more importantly, provided the social service – tea, biscuits and the latest gossip.

Edie’s activities were not limited to archery. She was close to her family and if you paid her a visit, you would have to hear the latest on the activities or achievements of at least one child or grand-child. She was also heavily committed to helping her church and the Prospect Lions.

She was a delightful lady and one of those people who could always see the funny side of things and raise a smile.